All round-robin and self-officiated - Sportsmanship Rules!

In each of two major annual tournaments - a National Championship and an International Championship - NMRA competition is offered in singles, doubles and mixed doubles. A third Doubles Only tournament is also hosted each year. At all three annual events, age bracketed play is set in five-year increments starting at age 40+. 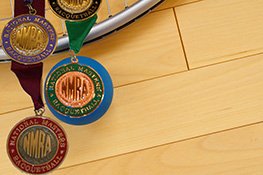